Skip to content
Shehnaaz Gill Wiki, Age, Bigg Boss, Boyfriend, Biography & More: Shehnaz Gill is an Indian model, actress, and a singer. She is currently one of the contestants in the popular reality TV show “Bigg Boss”.

Age, Career, Family & Boyfriend
Shehnaaz Gill was born in a Punjabi family on 27 January 1993 in Chandigarh, India. She is currently 26 years old. She was brought up in Chandigarh. She did her college at Lovely Professional University, Punjab and that’s when her career started.
She started her career by making appearances in music videos. Her debut song appearance was “Shiv Di Kitaab” in 2015, in which she played as the lead actress. From then, she started to appear in many music videos.
She was interested in acting since her childhood and she had taken part in many modeling agencies. Her appearance in the song ‘Majhe Di Jatti‘ made her famous. This Punjabi song has over 10 million views on YouTube.
She made her debut in the movie industry in 2019 with the film ‘Kala Shah Kala’ and after that movie, she didn’t act in any movie as of now.
In her music career, she has sung 13 songs, out of which “Burberry” and “Sarpanch” were more famous.
Coming to details about her family, the names of her father and mother are not known. Her father is a businessman. Her elder brother, Shahbaz Badesha is also a businessman like his father. Her relationship status is not known as she has not said anything publically about it. Whenever she was questioned about her relationship status, she usually ignores it. 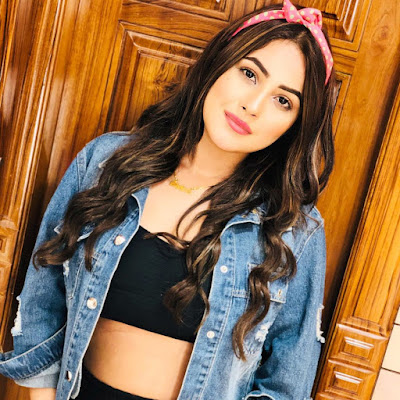 Also, read about other bigg boss contestants like Rashami Desai.

Controversy
Early in 2019, she had a controversy with another actress Himanshi Khurana. It all started when she made fun of Himanshi Khurana’s song ‘I Like It‘. This made Himanshi Khurana angry and she said that she (Shehnaaz) had been in a relationship with many guys. Since then, they both hate each other.
Social Media
Instagram: https://www.instagram.com/shehnaazgill/ (1.1m followers)
Facebook: https://www.facebook.com/ShehnazKGill/ (52k likes)
Twitter: https://twitter.com/ishehnaazgill (55 followers)