Skip to content
AnEsonGib is a popular FIFA YouTuber from the United Kingdom. He runs a channel on YouTube which has over 2.1 million subscribers. He is known for being friends with the Sidemen. Read more to know AnEsonGib age, Wikipedia, boxing, vs jake paul, height, weight, girlfriend, biography, net worth & more.

AnEsonGib was born on 4 July 1996 in Riyadh, Saudi Arabia. He is 24 years old as of 2020. His real name is Ali. He spent his childhood days in Dubai and from a very young age, he has very interested to play video games especially FIFA because of which he has become a successful YouTuber.
YouTube Career
He created his YouTube channel on 8 August 2012 and uploaded his first-ever YouTube video on 8 November 2012 which was a 45-second clip from the game FIFA 13. Ever since then, he started uploading FIFA gameplays, pack openings, pranks, and almost all types of content. He named the channel AnEsonGib because it said Big Nose An backward.
After 1 year of starting his YouTube channel, he gained only 6000 subscribers. 2014 was the year that changed everything. His channel blew up in 2014 and by the end of the year, he had around 250k subscribers.
In the first half of 2016, he hit 1 million subscribers. Next three years, his YouTube channel didn’t gain many subscribers, it has gained only 500k subscribers. Currently, he is sitting with 2,100,000+ subscribers. His channel
Boxing Career
Gib made his boxing debut on 3 February 2018. He was the undercard for KSI vs Joe Weller boxing match in the UK. His opponent for the event was MaxPlaysFIFA. Both FIFA Youtubers went for a fight and Ali has won the fight.
His second boxing match was on 25 August 2018. He was undercard for KSI vs Logan Paul boxing match in the UK. His opponent was Jay Swingler who is also a YouTuber and a part of the youtube channel TGFbro.
After four rounds of punching each other, it was declared that Gib has won the fight against Jay. Till now, Gib is undefeated in YouTuber boxing matches.
After his fight against Jake Paul, he will be seen fighting the Tiktok star Tayler Holder in the upcoming boxing event YouTubers vs Tiktokers. The event is organized by Social Gloves where a YouTuber will be facing a Tiktoker in the boxing ring. Previously, Tayler didn’t have an opponent & left it to the fans to decide. Many YouTubers wanted to take the chance but it was Gib who got the chance to appear in the ring again. Gib has an amazing experience in boxing as he had been involved in three fights & even won two of them. Tayler on the other hand doesn’t have much experience but he is still a better opponent when compared with other Tiktok stars. The two will be seen in the ring on June 12th in Miami. 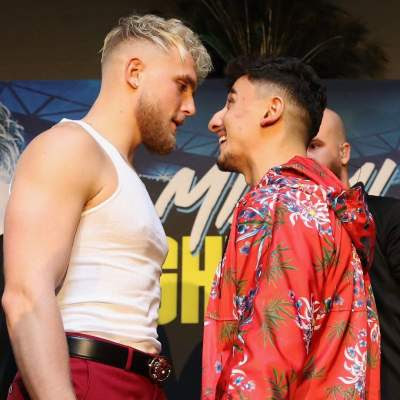 The idea of this Boxing match was brought up during KSI vs Logan Paul 2 Press Conference. The audience was chanting “We want Gib” and KSI called Gib onto the stage. Both shared a few words for each other.
For so long, the fight between Jake Paul & AnEsonGib was not confirmed. But finally, both Jake Paul and Gib made separate videos where they announced the official date of the fight. Jake and Ali are going to face each other on 30 January 2020. There is no undercard for this fight.

Facebook: Not Known
Twitter: https://twitter.com/AnEsonGib
Instagram: https://www.instagram.com/anesongib/
That’s it. This is the latest information about AnEsonGib. Check out WikiofCelebs.com for more wikis and biographies. Share the article with your friends if you found this helpful.