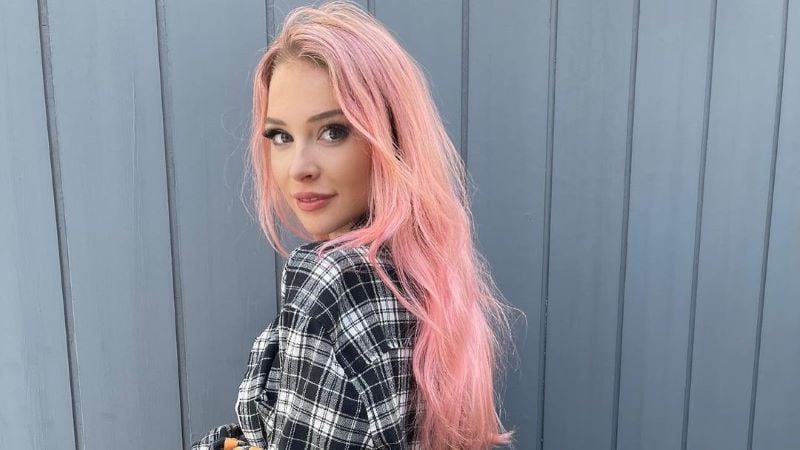 Bebahan (born: 2 September 1994) is a UK-based Tiktok star, Twitch streamer & social media influencer. She is one of the top rising stars on the Tiktok app. She is famous for sharing short entertaining videos. To date, she has gained more than a million followers on the platform. Read more to know about her age, height, wiki, bio, real name, net worth, boyfriend, weight, body measurements, family, ethnicity & more.

Born to English parents in Birmingham, England, Bebahan‘s birthday is on 2 September. Her real name is Hannah whereas she is Virgo by zodiac sign. She has completed basic high school education at an unknown local school. She attended college to pursue a degree in photography. However, she didn’t enjoy a bit of it & dropped out after one year.

Her ethnicity is mixed (English-Polish). Both of her parents are English while her grandfather is Polish. Coming to the details about her siblings, she has two sisters (one older & one younger). Her marital status is unmarried while her relationship status is single. Over the past few years, she has been in at least one relationship.

Bebahan primarily started her career on Twitch in December 2020. Before starting her influencer career, she had two businesses. One was a furniture business while the other was a beauty business. She had succeeded in profitably running both businesses. However, she wanted to do something different which led to streaming.

At the same time, she also launched her Tiktok account. On the app, she shared POV & funny entertaining clips. A few of her clips went on the app & she earned a few hundred thousand followers in no time. Through this, she started gaining followers on Twitch as well. Currently, she has over 1.2 million followers with 17 million total likes on the short video app.

She is a gaming freak and decided to stream her playing video games. On Twitch, she streams various video games such as Apex Legends, FIFA 22, Dying Light 2: Stay Human, etc. Also, she does Just Chatting streams where she reacts to popular videos on the internet. Her reactions to Sidemen videos are very popular. Hence, she uploads those reaction videos on her YouTube channel.

On top of these, she reuploads her Tiktok videos on her YouTube channel for better reach. All of her popular videos are YouTube Shorts with the most viewed video having over 37 million views. She has more than 899k subscribers with 811 million total video views. When it comes to Twitch, she has almost 180k followers.

Leaving this, she also launched a second channel named Bebahan2.0 in December 2021. Initially, she shared a few short videos. However, she went on to share Sidemen’s reaction videos. On top of reacting to the British group’s channel, she often reacts to KSI’s videos too. Right now, this channel has a bit over 140k subscribers and 68 million total video views.

Bebahan’s net worth is $550,000 (estimated). Her major income sources are Twitch & YouTube. As a full-time Twitch streamer, she makes most of her earnings using this platform. She uses all the features available on Twitch to make the most of them.

When it comes to YouTube, she comparatively makes lesser on this platform. Though her Shorts earn millions of views, she earns very little from those. Shorts are only useful to grow the channel. According to our calculations, she earns around $2,500 each month from ads.

Recently, she created a Patreon account to share exclusive content with her paid members. At the time, she has listed three monthly membership plans ranging between 10 AUD and 45 AUD. Each plan has its own perks and benefits. Though she hasn’t revealed the number of Patrons, we estimate that she’d be making a few thousand dollars each month through this source.

Bebahan is a Tiktok star, Twitch streamer, and social media influencer based in the UK.

What is Bebahan’s real name?

How much is Bebahan worth?

That’s it. This is the latest information about Bebahan. Check out WikiofCelebs.com for more wikis and biographies. Share this article with your friends if you found this helpful.