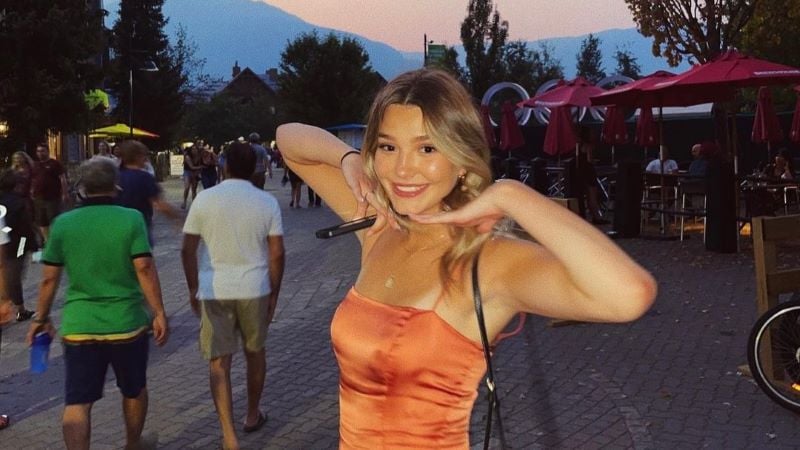 Ali Skovbye (born 16 May 2002) is a Canada-based TV actress and model. She is prominently known for appearing in various movies and TV series such as Firefly Lane, Once Upon a Time, You Me Her, Breakthrough, and many more. So far, the young actress has been actively acting for more than 13 years. Read the entire article to find the latest information about her wiki, height, age, bio, net worth, bf, parents, weight, family, ethnicity, siblings, nationality, religion, facts, and more.

Born in a Canadian family in Vancouver, BC, Canada, Ali Skovbye celebrates her birthday on the 16th of May. Her full name is Alissa Dyck-Skovbye and she is a Taurus by zodiac sign. She completed her schooling education at King George Secondary School. However, she hasn’t shared any information about her higher studies.

Ali Skovbye is an unmarried woman but has a boyfriend named Nikola Guzina. As per our research, it is believed that they’ve been together for more than two years. She often shares his pictures and features him on her Instagram stories. Apart from his name, we don’t have any information about him such as his profession. Prior to this, she could’ve been romantically linked with at least one person.

Moving further, her ethnicity is Canadian and she comes from a Scandinavian background. Though there is no information about her father, we found that her mother’s name is Tine Skovbye. Also, she has an elder sister named Tiera Skovbye. Just like Ali, she is also a very prominent actress and model. She is pretty popular for her notable works such as Riverdale, Nurses, 2 Hearts, Dirty John, etc.

Ali Skovbye began her acting career at the young age of 4. At that time, she was scouted for a commercial and eventually appeared in a Cadillac commercial. However, she made a proper acting debut in the year 2009 with the movie Personal Effects.

Next year, she made her TV debut with the TV series Smallville. However, she played a short role as Haley. In 2011, she appeared in four short films namely While I Breathe, Joy, Wishing Well, and Newborn respectively. Things were completely different as she mainly appeared in TV series for the next two years. She made notable appearances in TV series such as Fringe and Falling Skies.

In the movie Forever 16, she appeared in the role of Tiera’s sister who is actually her sibling in real life. Though they both appeared on Supernatural (2012) and Once Upon a Time (2011), they weren’t seen together in any single episode.

In the next few years, she continued to act in various movies such as One Christmas Eve, One Christmas Wish, Adventures in Babysitting, Campfire Kiss, etc. Regardless of having over 30 acting credits, she didn’t actually come to the limelight in the past decade as she always played short roles.

However, she came into the limelight for her appearance in the Netflix TV series Firefly Lane in the year 2021. The first season of the show was released in February 2021 where she played the role of Young Tully. Not just in season one, she also was seen in the second season of the popular series. As per IMDb, she has appeared in all 19 episodes from both seasons.

Ali Skovbye’s net worth is $400,000 (estimated). Her major sources of income are acting and modeling. As a full-time actress, she receives a handsome amount of money in the form of remuneration from the production company. However, the remuneration numbers are unavailable as they change with time and depend on her role.

Who is Ali Skovbye?

Ali Skovbye is an actress and model from Canada.

How old is Ali Skovbye?

How tall is Ali Skovbye?

Does Ali Skovbye have a boyfriend?

Yes, his name is Nikola Guzina.

What is Ali Skovbye’s net worth?